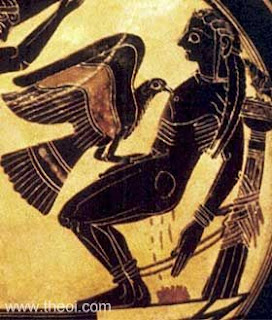 History is distinguished from all other sciences in that it is also an art. History is a science in collecting, finding, penetrating; it is an art because it recreates and portrays that which it has found and recognised. Other sciences are satisfied simply with recording what has been found; history requires the ability to recreate. (Leopold von Ranke, from The Theory and Practice of History, edited by Georg G. Iggers, 1976)

If we have learned anything from the postmodern critique of modernity it is that history is essentially storytelling and thus a near kin to ancient mythology. Both history and mythology attempt to explain how things got to be the way they are by telling some sort of story. While von Ranke, the 19th century founder of modern source-based history, would have demurred at this comparison, he nonetheless unwittingly exposed his own subjective underbelly by insisting that history was both a science and an "art."

In any case, the task of the storyteller, whether ancient or modern, is to portray and recreate events into a meaningful reality that is both relevant to (while at the same time constitutive of) the storyteller's context. Both ways of storytelling may in this sense by termed "mythic," as postmodernists are keen to point out, yet only one of these ways can properly be called "myth." That's because ancient storytelling is markedly different from modern storytelling. Despite von Ranke's subjective underbelly, we still expect our modern histories to be "rooted" in brute fact. Fantastical tales of gods, demigods, and other imaginative descriptions of forces beyond human grasp could never satisfy the modern mind as faithful descriptions of reality if such tales were composed today, though they might entertain us as fiction.

Indeed, what we have come to expect in our modern stories -- our "histories" -- is empirical accuracy. We expect a high degree of awareness of the universal laws that govern nature. We expect a faithful retelling of events as they actually happened or at least a very close approximation of what happened. We also expect a fair assessment of and appreciation for the social and societal contexts that serve as the all-important interpretive grids through which our storytellers filter their modern tales. Even when persons and events take on "larger-than-life" legendary status, we hold fast to their empirical "rootedness" so that they may continue to have meaning for us as icons of our culture.

In contrast, we afford to the ancients a high degree of imagination in their story-craft, a dabbling in the absurd, a dreaming of innocence. There is little to no expectation that the ancients should have been interested in our conventional ways of looking at the world, or to have had a similar preoccupation with accuracy or brute fact. From our perspective, stories about Osiris and Horus (Egypt), Prometheus and Atlas (Greek), or the Gilgamesh Epic (Ancient Near East), do not count as history in the modern sense, no matter how much they may have served to shape and mold their respective worldviews in the way that histories do today. And we're okay with that.

Yet this is more than just a casual acceptance. We recognize the value of ancient mythologies as "portals" through which we view a "mind-world" that otherwise would be lost and forgotten. Whether explained in terms of the evolution of the brain or the evolution of culture (or no doubt some combination of both physiological and social factors), the fact remains that the ancients thought very differently than we moderns do; they were conscious in a different way -- not just by degree, but in kind. Something has radically changed in human consciousness over the last three milliennia or so. No doubt there have been many such "mind-changes" in the 200,000 years of our existence as a species, but this happens to be one that we can actually see because the stories are still with us.

The most ancient of these stories stem from a period that Henri Frankfort termed mythopoeic thought: a time before philosophy, logic, and rationalism; when human beings did not view the governance of the cosmos in terms of impersonal laws but rather in terms of personal agency. The rise and fall of rivers, the seasons of the year, the occurrences of drought or deluge -- all events controlled as an act of the will by some god or spirit. Simply put, we value ancient myth because instinctively we know that the mythopoeic mind is gone forever, though, paradoxically, the archetypes formed by this mind still haunt our modern psyche and inform our own pursuit of meaning. They stand as shadows of a lost "embeddedness" we once had with the cosmos, communicating the earliest aspirations of our species to realize transcendence, to grasp the divine, and, in so doing, convey to us the earliest realizations of our estrangement from the Ground of Being itself.

Needless to say, the shift from ancient to modern consciousness did not happen overnight. Evolution involves gradual change over time. Standing between the ancient and modern minds -- in the transition -- is the so-called Axial Age, characterized by the emergence of a new sense of self-awareness, "when people began to see themselves as objective, distinct entities" (Mayer). This period also saw the parallel developments of the major religious traditions -- Buddhism, Confucianism, Zoroastrianism, and, of course, Judaism. Meanwhile the Greeks were imbibing in logos, while vestiges of their old mythologies continued on in local cultus, as old wives' tales, or were re-crafted as quasi-histories (e.g. Homer).

Standing right at the pivot point of the Axial Age are the sacred texts of the biblical tradition, written over the course of some eight centuries, more or less, but certainly preserving stories that are much older; stories of the ancient mythopoeic mind, remembered and re-crafted into Israel's sacred story. It should not surprise us then to find myth, quasi-history, and even early attempts at empirical history within the same corpus, or even within the same book, as in the case of the Book of Genesis. Herein we see ancient cosmologies, descriptions of paradisiacal conditions, talking serpents, life and knowledge giving fruit, angelic unions with humans and the giants they produced, an epoch flood (Israel's version of a common myth of the ANE), and heroes that live incredibly long lifespans. But we also see names, empires, cities and other locales, customs, and events that are consonant with, if not supported by, modern archaeological finds.

In many places Holy Scripture turns out to be a cacophony of ancient folklore mixed with actual historical persons, places and events, making it notoriously difficult at times to tease out the threads of "brute fact" from their mythological embroidery. This is true even for the later portions of the biblical corpus when stronger and stronger urges towards historical "rootedness" (on the part of the human authors) were not necessarily matched with equally strong concerns for empirical precision or with any particular regard to, or consciousness of, cultural bias. Yet, paradoxically, these are the conditions that must exist, and the kind of sacred texts that must emerge, within any religious tradition that would make the audacious claim that God actually and truly discloses the divine-self to humankind by fully assuming and participating in the human condition: "The Word of God en-fleshed in the words of men."