Rehabilitating Marcion (Part Three): The Dilemma of the Schizophrenic God 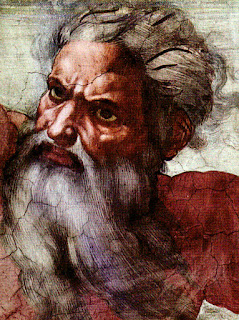 All of the ink put to page against Marcion by writers such as Tertullian and Irenaeus serve only to demonstrate how dangerous Marcion's influence on the early Christian community was. Marcion was a threat because he had made an observation that still troubles Christians today; namely, the picture of God often portrayed in the Hebrew scriptures is very different from the picture portrayed by the Apostle Paul of the all-loving, all-merciful God and Father of Jesus Christ.

Two different portraits of God meant two different ways of dealing with human beings, hence, "Marcion's Dilemma." Given the pervasiveness of Neo-Platonism, it is not difficult to understand why Marcion and his followers had "solved" their dilemma by positing two different gods: the first, a capricious and vengeful demiurge, creator of the material universe; the second, the loving God who had sent his Son into the world to reveal the truth about humanity's existence.

For better or for worse, Marcion's Dilemma had changed the hermeneutical landscape forever. As much as Tertullian protested that Marcion had divided the Holy Scriptures, it was no longer the case that Christians could view the writings of their apostolic forbearers as the simple continuation of the Hebrew scriptural tradition. Where once there had been just one scriptural tradition, now there were two -- two covenants, two testaments, and eventually even two canons.

Moreover the stubborn continued existence of the people of the (now) "Old Testament," i.e. the Jews, only served to emphasize these differences. Marcion's contention that the Jewish scriptures were (in the words of Robert M. Price) "true enough in the Jewish frame of reference" certainly did not sit well with his orthodox detractors. For instance, Marcion had agreed with Jewish exegetes that Isaiah 7:14 (the prophecy of the "young woman" or "virgin") saw its fulfillment in Isaiah's day -- a view that would not be openly admitted in Christian academic circles until the 20th century. Thus Marcion's challenge cut deep into the way Christians had been interpreting the Hebrew prophets, establishing that the Hebrew scriptures stood on their own without any need of Christian elucidation.

Needless to say, Marcion's detractors were compelled to meet the Marcionite challenge head-on and to crush it in the polemical arena of competing ideas. Yet while these early Christian polemicists may have successfully refuted Marcionite dualism, they had not really resolved Marcion's Dilemma as much as they (unwittingly) recast the dilemma in terms of a "schizophrenic deity." For the same God that the Bible presented as commanding genocide, if not committing it himself (e.g. the flood), was also presented in Scripture as the God who "so loved the world" that he gave his only Son, Jesus Christ. Hence, theologians down through the ages would be faced with an equivocal portrait of God, whether or not they had any inkling that Marcion's Dilemma lay at the root of their work.

Accordingly, the history of theology has seen the development of two different approaches to this dilemma. The first approach -- that of discontinuity -- embraces the fundamental divide between the testaments, and, hence, the fundamentally different portraits of God and his dealings with human beings. In this paradigm, God's wrath, jealousy, and essential nature of absolute rectitude or justice stand in stark contrast and opposition to God's desire to show mercy, his love for fallen beings, and his propensity (from time to time) to bestow grace. The two sides of God's "personality" are held in tension, particularly in the Old Testament, until they are reconciled by the Cross of Christ. Lutheranism's dichotomy of "law and gospel" is a prime example of just such a theology of discontinuity, while Anabaptism and Dispensationalism represent extreme forms of this approach.

The alternative approach -- that of continuity -- attempts to blur the divide between the testaments, and, hence, to contend for a univocal portrait of God and his dealings with human beings. Reformed Theology's "Covenant of Grace" is instructive here as an example of a theology of continuity. Simply put, God's disposition towards humankind does not change between the testaments, at least not since the Fall (and its "Covenant of Works"). Rather, the contrast between the "Old" and "New" Testaments is merely one of perspective. In Christ, God demonstrates what his disposition has always been for the elect, while wrath and judgment (on full display in God's dealings with pagan nations in the Old Testament) are reserved for the reprobate. Theonomy (a.k.a. Christian Reconstructionism) represents this approach in the extreme, with its insistence on the application of the Mosaic Law Code in contemporary society.

Paradoxically, both approaches, at least in their western forms, have found common cause in their respective embrace of the satisfaction theory of the atonement (recast later as the "penal-substitution" theory). Satisfaction theory provides a way for both theologies to placate and appease the wrath of the holy and vengeful God portrayed in the Old Testament, by seeing in Christ the innocent victim who was willing to endure the wrath of God on behalf of others; either on behalf of the entire world (as a theology of discontinuity might see it), or else on behalf of the elect only (as a theology of continuity would contend).

But are these the only options open to us? Or can Marcion's Dilemma be resolved in another way? The next article in this series (Part Four - Divinizing Our Estrangement) will explore this question.