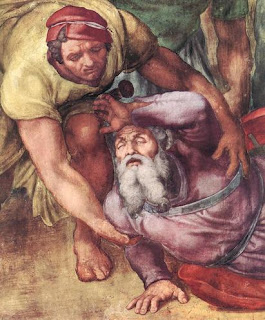 It is easy to see why Marcion would have been attracted to the writings of Paul. Paul's articulation and eloquence, his mastery of Hellenistic style and rhetoric, if not the universal appeal of his message, are still features that intrigue scholars to this day. Better than any other early Christian writer, Paul had worked through the Jew/Gentile issue in a way that left no doubt as to the possibility of redemption for all, Jew and Gentile alike. Even before the synoptic tradition would attempt to find the right metaphor and language to do justice to the scope and ramifications of Jesus' life and ministry, Paul's impressive body of letters had already convincingly portrayed Christ Jesus as "cosmic Savior" -- the One who had broken down the "dividing wall of hostility by abolishing the law of commandments expressed in ordinances" (Eph. 2:14-15). So Paul could easily have been taken as the severest critic of the Mosaic law with its ceremonial prescriptions, dietary restrictions, and requirement of ritual circumcision for full inclusion. Moreover, in the absence of an authorized canon, there would have been no compelling reason for Marcion to have read Paul's writings through the lens of the Book of Acts, and thus no reason to suppose that Paul was allied to or dependent upon the other so-called apostles based in Jerusalem. After all, "those who seemed to be pillars" added nothing to his message; he had even "opposed Cephas to his face" (cf. Gal. 2).

And so a modern-day vindication of Marcion might begin...

But there is a better reason than those given above to suggest that Marcion's instinct to begin with Paul may have been a sound one, even if Marcion was probably unaware of it. Of all the early Christian writings that would eventually be gathered together, canonized, and classified as "New Testament," Paul's letters represent the earliest written witnesses to the Christ-event. Thus, rather than regarding Paul's letters as theological commentary on the four Gospels/Acts (as most Christians are prone to do), would it not be more natural to begin with Paul's letters as foundational? -- that is to say, as primary witnesses to the Christ-event, while the four gospels are at best secondary? This thesis suggests itself for more than just chronological reasons. Rather Paul's claim to be an eyewitness of the risen Christ is the only certain firsthand testimony of the resurrection that we have in the New Testament, and thus, undoubtedly, the most authentic.

It stands to reason then that Paul's letters together constitute mainstream Christianity's "first gospel." Yet, unlike the later gospels, Paul's is not given in narrative form, but rather as practical, theological, and pastoral treatises. For many, this might disqualify Paul as a bona fide "evangelist." But Paul's primary witness to the resurrection over against the secondary witnesses of the canonical gospels should not be overlooked. Indeed, if Christians are compelled to draw their Christology only from canonical sources, then it stands to reason that the most natural place to begin would be with Paul before any consideration of the later stories about Jesus, i.e. the gospels, precisely because they are later stories. This is not to say that Christians are obliged to devalue the witness of the four canonical gospels -- far from it. Rather a "canonical" approach to Christology begins with Paul, the first witness, and then moves on to consider the stories about Jesus as remembered, as passed down, as believed, and, yes, even as embellished by the pious theologizing that inevitably took place in the context of the communities from which they emerged.