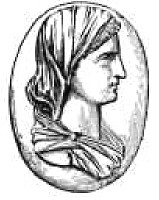 Note: This entry is not intended as an endorsement of Marcionism, Gnosticism, or any other form of mythical or metaphysical dualism.


Since Marcion separated the New Testament from the Old, he is necessarily subsequent to that which he separated, inasmuch as it was only in his power to separate what was previously united. Having been united previous to its separation, the fact of its subsequent separation proves the subsequence also of the man who effected the separation. (Tertullian, De praescriptione haereticorum 30)

Marcion of Sinope (ca. 110-160) has the distinction of being one of the first "heresiarchs" in church history. Born of wealthy parents, Marcion's father was also the bishop of Sinope in Asia Minor. It is probable that Marcion himself had been consecrated a bishop to assist his father. Some accounts suggest that his father had him expelled from Sinope after falling into sin with a consecrated virgin, though this may be slander since Marcion's austerity is well attested. In any case, Marcion had some kind of fallout with his father that motivated him to make his way to Rome around 140 AD, where he sought admission (presumably as a bishop) into the Roman Church after the death of Pope Hyginus (ca. 136-140). Despite the Roman Church's refusal to recognize him, it did not take long for Marcion to become a popular teacher and to generate a large following, particularly during the pontificate of Anicetus (ca. 150-167). Conflict with the bishops of Rome would eventually lead to his excommunication around 144, despite a generous donation of 200,000 sesterces to the church (which was later returned to him). However, Marcion would go on to establish churches of his own that would rival those of catholic Christianity for about two centuries.

Marcion shared many beliefs in common with the Gnostics, including the dualistic notion that the god presented in the Hebrew scriptures and the God who was the Father of Jesus Christ were different gods. Marcion contended that the god presented in the Hebrew scriptures was a lesser god, a "demiurge," who had created the material universe, and was thus de facto the author of sin. In contrast, Jesus was the Son of an otherwise unknown or "alien" God, who, before sending Christ into the world, had no interactions with it. This God had sent Jesus into the world for the purpose of revealing the truth about existence to humankind, thus enabling humankind to escape from the earthly trap of the demiurge.

What sets Marcion apart from the Gnostics was the fact that the latter based their teachings on "secret knowledge" known only to themselves, while Marcion relied solely on the content of the Letters of Paul (minus the Pastorals), along with the Evangelikon, an edited version of the Gospel of Luke devoid of its infancy narrative and all allusions to the Old Testament. To these he compared the Hebrew scriptures, and concluded that many of the teachings of Jesus Christ were in conflict with the character and actions of the capricious and jealous god portrayed in them. He also rejected many Christian writings as hopelessly compromised in their attempts to identify the Father of Jesus Christ with the demiurge of the Hebrews. In so doing, he was the first figure in Christian history to define a recognized group of writings that he regarded as authoritative and faithful to the teachings of Christ, i.e., a "canon."

Reacting to the Marcionite threat, Christians would never view Holy Scripture in the same way again. Not only did this threat compel the official church to define its own list of authorized writings (eventually crystallizing in an official canon or "rule"), but Marcion's observation that Hebrew and Christian writings often presented two radically different portraits of God would also leave its indelible mark in the demarcation that Christians would now begin to make between the "Old" and "New" Testaments. While later generations of Christians would take this division for granted, this was not originally the case. Simply put, Marcion's observation forced the church to bifurcate their emerging list of authorized sacred writings, whereas before they were (in Tertullian's words) "previously united." Needless to say, the hermeneutical challenges and issues that resulted from this radical division would persist in the history of scriptural interpretation right up to our very day.