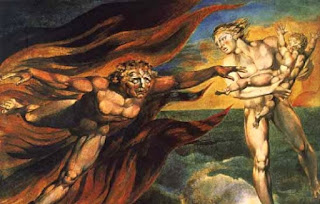 See also: Paradise Imagined (Part One) and The Two Minds of Augustine.


[The story of the Fall] is the profoundest and richest expression of man's awareness of his existential estrangement and provides the scheme in which the transition from essence to existence can be treated. (Paul Tillich, Systematic Theology 2:31)

Until recent times, the traditional meta-narrative of Original Sin has been able to provide a sufficient answer to the origin of sin through its telling of the story of Adam's fall. Though somewhat at pains to explain why the Fall happened in the first place (i.e. beyond "sin-as-possibility," or, in Augustinian terms, "posse peccare"), the traditional meta-narrative nonetheless neatly explained every subsequent sinful act in human history as predicated on Adam's first sin and its consequent deleterious effects upon human nature. Thus sin becomes both inevitable and universal in Adam's progeny (who were now deemed non posse non peccare). However, with the decoding of the human genome, science has put the final nail in the coffin of monogenesis (i.e., human origins from an original couple), and with it the idea of Adam's sin as "causal event." Eden's story of "Paradise Lost" suddenly becomes the story of "Paradise Imagined." Genesis's epic etiology is recast as a mythic story of realization, not of how things had gone awry, but simply that they have. To borrow a phrase from Tillich, our ancient storytellers had "dreamed of innocence."

Thus, for the theistic-evolutionist, the origin of sin as event is no longer an issue of theological importance. Even if it were possible to determine the exact moment when the willful act of a common ancestor could be counted as sin, there would be no basis, either theological or ontological, to posit a causal connection between that supposed "original" sin and every subsequent sinful action in the history of the human species. Instead, the theistic-evolutionist seeks to explain the origination of sin as grounded in conditions that would not only make sin possible, but also inevitable; and, if inevitable, then universal as well.

So we must start with a consideration of divine creative activity, and in particular creatio continua with its divine gift of "becoming." If, as we have argued previously, the "freedom to become" means that the processes of an evolving universe are free, contingent, and undetermined on the physical level, then what does this "freedom to become" imply on the level of consciousness? What does indeterminacy look like in the actualized moral realm of this evolving universe? And in what ways do free moral agents experience or exhibit this "freedom to become"? These are the questions at the heart of a theistic-evolutionary account of Original Sin.

As a preliminary answer to these questions, we suggested in Theosis Interrupted that the indeterminacy and contingency of the cosmos take on new significance with the arrival of human consciousness, particularly in the corresponding emergence of the human faculty of volition, or "will." Simply put, human beings, considered as moral agents, are "free" to make moral choices; a "freedom" that includes the very real possibility of sin because it assumes "free will" as an essential human faculty (i.e., libertas voluntatis essentialis). Yet, as tidy as this explanation may be in explaining "sin-as-possibility," the universal aspect of sin (or "sin-as-inevitability") must be posited on different grounds; and therein lies the rub, for one must exonerate nature as the cause of sin (else fall into Gnosticism) while at the same time avoiding the suggestion that God is the author of it.

Yet this may not be as imposing a dilemma as it appears to be at first glance. If the course of the evolution of our species had followed a straight directional line from single cell through to us, with the achievement of consciousness as its ultimate end, then we should expect to see not only the "freedom of will" but also the "perfection of will" as its consequent results, making the question of the presence of sin in the cosmos a greater theological conundrum. (Incidentally this is why both orthogenesis and Intelligent Design fall short as explanations.) But, as was argued in God's Purpose or Nature's Dice, the physical processes of nature, including our own evolution as a species, follow no inherent "end-driven" (i.e. teleological) pathways. Consciousness, as far as the physical realm is concerned, is merely a successful adaptation of our species, and the faculty of volition, or "will," a mere byproduct of the same.

As a species we are an accumulation of our biological past, with its baggage of both useful and vestigial systems, complete with structures, faculties, and instincts that may give all the appearance of having been evolved for our particular moment in cosmic history, but have more than likely been conscripted and co-opted into service from earlier stages of our evolutionary past. This can be seen in stark detail in the evolutionary layers of the human brain: with its "reptilian layer" (i.e. brain stem and cerebellum), which controls our vital functions; the limbic or early mammalian layer (i.e. hippocampus, amygdala, hypothalamus), which constitutes not only the seat of our judgment values, but also of our unconscious behaviors; and finally, the most flexible layer, the neocortex, which we share with higher primates, constituting the seat of learning and (in humans) of higher abstract thought.

It stands to reason then that while we may call our faculty of will or volition "free," the choices set before us are certainly far from it. Luther's keen insight into the servum arbitrium comes to mind here, not the mistranslated "bondage of the will" but rather the "bondage of choice." Human choice is contextually conditioned, subject to our human finiteness, and always obliged to pay attention to our more basic "lower" instincts. The undeniable fact is that we spend most of our time suppressing and re-directing instincts we once depended on for survival and/or the passing on of our genes.The instinct of "fight or flight," once a useful defense mechanism (and still of limited value in that regard) becomes the anxiety that so afflicts our higher selves; the primal urge to reproduce easily becomes lust; the instinct to horde easily becomes greed. Indeed, in the final analysis, Aquinas' suggestion that concupiscence involves not the corruption of human nature, but rather the struggle to overcome the lower passions and desires which are natural to it, turns out to be not far from the truth.
Posted by Dan Dunlap at 1:23 AM