The "Two Minds" of Augustine: Original Sin considered from an evolutionary perspective 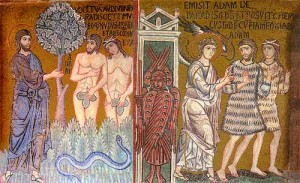 Given its mythological grounding in the early stories of Genesis, it would be easy for the theistic evolutionist to downplay the concept of Original Sin. Indeed, the temptation to dismiss it altogether only intensifies when it is admitted that the doctrine owes more to Saint Augustine's controversies with Pelagius than to the Apostle Paul's interpretation of the Fall of Adam in Romans 5 (for a further discussion see Adam and the Undoing of Augustine). Yet this would prove too hasty a dismissal if only for the reason that to ignore the western discourse on Original Sin would amount to ignoring nearly two millennia of constructive theologizing on the matters of sin and human nature.

The idea that humanity had a share in Adam's "first sin" entered theological discourse as early as the second century (e.g. Tertullian, Irenaeus). Yet it was Augustine in the fifth century who provided the basic meta-narrative of the doctrine of Original Sin for western theology. Augustine taught that Adam's sin had an adverse effect on human nature, depriving it of original righteousness and subjecting it to concupiscence (i.e. sinful inclination). He further argued that, in some sense, all of humanity was present with Adam in the Garden; hence, all sinned in Adam (or so he understood Romans 5:12 to teach). For Augustine, this explanation not only satisfied the question of why humanity suffers the consequences of Adam's sin (i.e. death) but also why human beings cannot help but sin (non posse non peccare).

While this basic meta-narrative would provide the foundation for the western understanding of Original Sin, it would also provide the tinder that would ignite an internecine debate in the western church. For the next eleven centuries the debate on Original Sin in the west would not be content with Augustine's basic model, nor even some of his conclusions. Questions would arise about what humanity actually "lost" in the Fall, how this loss affected human nature, and about the nature and seat of sin. The resulting theological discourse on these questions would follow one of two main trajectories, coalescing in "two minds," until finally these "two minds" would end up on either side of the Reformation divide in the sixteenth century.

The "first mind" would come to view original righteousness as an essential attribute of human nature as originally constituted at Creation. This pristine human condition is what was lost to Adam and to his progeny in the Fall due to his willful disobedience. Consequently the loss of original righteousness meant that human nature became corrupted and warped, thus giving human nature a bent or propensity to sin (i.e. concupiscence). As this "mind" is arguably closer to Augustine's own mind, we can appropriately call this position "primitive Augustinianism." Ironically, this view would land on the Protestant side of the Reformation divide, only to end up being condemned, in part, by Trent.

The "second mind" viewed original righteousness in supernaturalist terms, as the endowments and prerogatives that God instilled in human nature at Creation, though are not natural to human nature as such. These included freedom from concupiscence, a mastery of lower "animal" desires and instincts, a high degree of infused knowledge, and the gifts of sanctifying grace, immortality, and freedom from pain. As divine endowments and prerogatives, these were conferred or "super-added" to human nature. Hence, the Fall involves the deprivation of supernatural attributes, not natural ones. Adam's human nature as nature is left essentially intact after the Fall, though now wounded and impaired so as not to be able to fulfill the purposes for which it was created. However, concupiscence, still defined theologically as the propensity or inclination to sin, does not involve the corruption of human nature, but rather the struggle to overcome the lower passions and desires which are natural to a human nature deprived of original righteousness. This is essentially the view defined as orthodox by Trent, to which we will assign the name "scholastic Augustinianism."

It should come as no surprise to readers of this blog that the "scholastic Augustinian" position (that espoused by the Roman Catechism) would be the more "theistic-evolution-friendly" of the two minds of Augustine, particularly in light of the arguments set forth in Theosis Interrupted and Theosis Realized. This can be seen by contrasting how the "two minds" answer our earlier questions, namely (1) What was lost in the fall? (2) How did this loss affect human nature? and (3) Wherein lies the nature and seat of sin?

For most theistic evolutionists, the question of what was lost in the Fall is a non-starter, since the Fall considered as historical event is denied. Simply put, a prelapsarian state of perfect, immortal bliss for the first human beings never existed. The western meta-narrative is more the story of "Paradise Imagined" than it is of "Paradise Lost."  Yet as an "imagined paradise" it is still very instructive for our purposes in what it tells us about how western Christian thinkers down through the ages have regarded human nature as nature. A view that posits original righteousness and immortality as inherent human attributes and qualities is incompatible with a view of the cosmos (and our species) as emerging from evolving, indeterminate processes. Hence, the verdict of science is decidedly against "primitive Augustinianism" as an adequate theological explanation for the presence of sin in the world.

Yet "scholastic Augustinianism" holds up rather well, not in its assertion of what was "lost" in a supposed historical fall, but rather in what it tells us about human nature as nature, that is, how we "find" it in our own experience. Human nature in and of itself (i.e. without supernatural endowments) is mortal and in constant struggle with its lower passions and desires; at the same time it aspires to transcend and overcome these same passions and desires. Also implicit in this scholastic model is a denial that human nature is "sinful" or "corrupt" as a result of the Fall (or a denial that human nature is sinful in and of itself without a historical fall). Human nature as nature is weak and impaired, yes; but not evil.

While neither "mind" of Augustine would view the inclination to sin as a condition intended by God for human beings, there is nonetheless a huge difference between a view that posits concupiscence as a distortion and corruption of inherent human qualities and attributes and a view that understands it essentially in terms of human nature left to its own devices after being deprived of supernatural ones.

Arguably, the latter position (again the "scholastic Augustinian" position) shows great promise in pointing theistic evolutionists toward an understanding of sin as conditioned on the primal instincts and components from which consciousness and moral awareness would eventually emerge in our species. For example, earlier instincts that our biological progenitors once depended upon for survival become "base desires" that require harnessing in socially aware moral beings -- a constant struggle in which we often fail.

The advocates of "primitive Augustinianism," particularly the Protestant Reformers, followed their fifth century mentor's opinion that Adam's descendants now live "in sin." Hence they viewed sin primarily as a state or condition -- something inherent in the post-fall human nature itself. This inherent corruption renders humanity liable to God's wrath, for as Calvin stated:


Original sin, therefore, seems to be a hereditary depravity and corruption of our nature, diffused into all parts of the soul, which first makes us liable to God's wrath, then also brings forth in us those works which Scripture calls "works of the flesh" (Gal 5:19). (Institutes II:1:8)

Taken to its logical conclusion, the Reformers reckoned that human beings were guilty apart from any sinful actions by virtue of their share in Adam's nature, which is the seat of sin. Hence, primarily speaking, sin is grounded in nature, not action; one's subjective guilt for sinful actions is secondary to one's objective guilt in Adam. In the words of the oft repeated aphorism, "We are not sinners because we sin, we sin because we are sinners." Furthermore, Original Sin is identified with concupiscence (the propensity to sin). As it states in Article IX of the Thirty-nine Articles of Religion, "therefore every person born into this world, it deserveth God's wrath and damnation."

Unquestionably this is where the "scholastic Augustinian" mind is at most variance with its more primitive sibling. As far back as the eleventh century, Anselm of Canterbury had argued for a radical distinction between the "privation of righteousness that every man ought to possess" and concupiscence, a distinction that would be developed further by Thomas Aquinas in the thirteenth century.  Finally, the Council of Trent in 1597 would condemn the (Protestant) view that identified Original Sin and concupiscence; instead, the council would teach that concupiscence, which remains in the baptized, is "not truly and properly 'sin'...but only to be called sin in the sense that it is of sin and inclines to sin" (Decree 5, Concerning Original Sin).

To this day the official Roman Catholic approach to sin is voluntarist, that is, rooted in the exercise of free will. In the Catholic view human nature cannot be called "evil," because it is still a natural creation of God. Indeed, human nature, though an influence on the will to sin, cannot be said to be the cause of sin. One can be said to be guilty of sin only subjectively, not objectively, and only when sin is voluntary (that is, when one is willfully disobedient).

The implications of this view for a theistic evolutionary account of sin should be obvious. The voluntarist understanding of sin is happily at home in an evolving universe of undetermined possibilities, within which sin must be considered not only a very real possibility in the actualized moral realm of this universe, but an inevitable one as well, yet, in a way that exonerates "nature" as its cause.

In the final analysis, the centuries-old struggle between the "two minds" of Augustine has helped the theistic evolutionist find a way through the fog of this issue more than it has hindered the search; not so much in rooting the cause of sin in some primordial event, but in raising (and in some cases answering) the questions that inevitably arise concerning the nature of sin and the nature of humanity.