Theosis Realized: An evolutionary look at creation, the fall, and our restoration in Christ (Part Two) 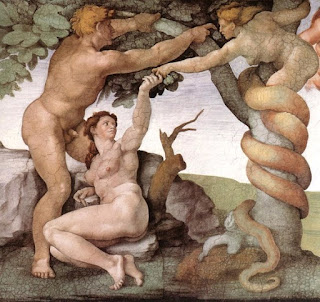 "Everything else about us," Hunsinger continues, "is regarded as an abstraction that is destined to disappear." Christianity has one central doctrine, indeed, one defining moment, that distinguishes it from all other ideas or held beliefs: the Incarnation. All else in Christianity, even teachings deemed essential to the Faith (e.g. the Trinity, the resurrection, salvation), hinge on the question of who we believe Jesus of Nazareth to be, and what significance there is in this belief.

If creation ex nihilo constitutes the divine gift of "being," and creatio continua the divine gift of "becoming," then Incarnation constitutes the supreme act of kenosis in that the Creator unites and identifies with creation itself. The One who is immutable and impassable in the divine-self becomes, in time and space, mutable and passable in something else, i.e., in what the divine-self assumes. In Johannine terms, the Word that was with God, and was itself God, became flesh.

It stands to reason then that the Incarnation should not be seen merely as the possibility of a "theosis restored" in view of willful disobedience in an actualized moral realm.  Rather it constitutes the goal of a "theosis anticipated" from the initial act of creation, and the very ground of a "theosis realized" in the eschaton, that "God may be all in all" (I Cor. 15:28).

The reader might be tempted here to speculate (as so many great thinkers have) whether, if humanity had not sinned, God would have become incarnate. Yet the suggestion that the Word becomes flesh only in view of disobedience leads to the unacceptable conclusion that the Incarnation was a second thought, a divine contingency plan, a mere remedy for sin.  As Athanasius asserts, "God became a human being that humanity might become divine." Certainly this must hold true whether sin-as-possibility is actualized or not. Theosis, that is, God's call to and drawing of the cosmos to share in God's own inner life, is of grace from first to last.

Yet if the implications set forth in my last essay (Theosis Interrupted) hold true, then the above question would seem to be redundant. If the "freedom-to-become" means, in the physical realm, that an evolving, contingent and undetermined universe includes the possibilities of false-starts, misdirections, and dead-end processes in the survival-of-the-fittest struggle towards greater and greater complexity, then the same principle applied to the actualized moral realm of this evolving universe appears to compel us to regard sin not only as a very real possibility, but perhaps also an inevitable one. (Though we need to take caution lest we stumble into the Gnostic notion of sin as an essential condition.)

As an actualized event, the Incarnation contains within itself the realization of theosis not only for the whole human race, but indeed for the entire cosmos as well. This is not to say that historically and experientially theosis has reached its completion in each individual, but only that a real irreversibility of process towards theosis is begun, but in such a way as to leave the future of each individual open to the real possibility of acceptance or rejection. Yet the grace and offer of God is such as to cut through the ambivalent situation of Adam's free-agency with all of its conflicting loyalties and confused passions, so as to address each individual as individual. Hence, the prospect of God's "Yes" canceling out Adam's "No" by persuasively and lovingly cutting through the human condition to negate and reverse each act of willful rebellion is not only a real possibility, but also a real hope for the Christian.