Adam and the Undoing of Augustine 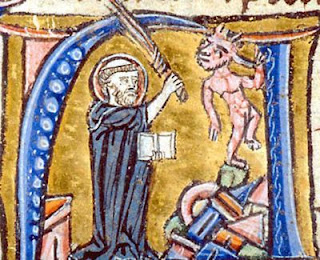 There are two main issues at stake for those who insist that a belief in a historical Adam and Eve is essential to the Gospel. The first issue concerns the integrity of Scripture, the charge being that if Paul were mistaken in his belief in a historical Adam and Eve then Scripture would be mistaken as well. Hopefully my previous article Weighing in on the Adam Debate was to some degree an answer to this charge.

The second issue is probably the more emotive of the two because, as SBTS president Al Mohler contends in his recent article on the historicity of Adam, a whole way of thinking about the Gospel is at stake. States Mohler, "The denial of a historical Adam means that we would have to tell the Bible's story in a very different way than the church has told it for centuries as the Bible has been read, taught, preached, and believed." While I understand why Mohler is keen to assert that a belief in a historical Adam constitutes the linchpin of the Gospel, I would contend that this has more to do with faulty theology (namely, Augustinianism) than it does with what the Bible actually teaches.

What follows hereafter is not an attempt to recast the biblical metanarrative sans a historical Adam, but rather to expose the faulty theology that lies behind the dominant, centuries-old Western telling of the story of the Gospel, a telling more dependent on St. Augustine than on St. Paul.  The undoing of Augustine is set forth below in three premises drawn from the Adam-story, especially as it relates to Paul's discussion in Romans 5:12-21.


First Premise: The entire human race did not participate in the guilt of Adam's sin, but rather in the consequences of it.

The concept of "original sin" is the hallmark of the Augustinian system, stoutly defended today by most expressions of Western Christianity. But is the concept really taught in Scripture? In Romans 5?  Actually, it stems from Augustine's take on a misleading Latin translation of the last phrase in Romans 5:12 -- "in quo omnes peccaverunt," which translates "in whom [Adam] all sinned." However, the Greek phrase "ἐφ᾽ ᾧ πάντες ἥμαρτον" is more properly translated "because all sinned."  So rather than Romans 5:12 teaching that all die because in Adam all sin, it simply means that, like Adam, all die because all sin.

Paul's point in Romans 5:12-21 is not to tell us about how we contracted "original sin" from Adam, but rather about how death became the defining factor of human existence through one man's transgression. The key to understanding this passage is found in Verses 13-14:

13 for sin indeed was in the world before the law was given, but sin is not counted where there is no law. 14 Yet death reigned from Adam to Moses, even over those whose sinning was not like the transgression of Adam, who was a type of the one who was to come.

Paul teaches here that prior to the Law of Moses the only "law" (i.e. explicit command with a penalty attached to it) was God's instruction to Adam not to eat of the fruit of the tree of the knowledge of good and evil. Unfortunately for Adam and his progeny this particular "law" had a death sentence attached to it. Thus, because of Adam's one transgression we all face death. This is not to say that there was no other sin in the world prior to Moses or that our individual sins do not factor into death. Rather, the story of Adam as re-told by Paul is that death was unleashed by Adam's one transgression and was then free to spread throughout the earth to inflict all who, like Adam, commit sin.  As Verse 12 says, "Death spread to all people because all sinned."

SIDEBAR NOTE: Verse 12 does say that "sin entered the world through one man," but this simply means that Adam was the first sinner. The real point of the passage is to tell us how Adam's one transgression led to death for all in contrast to Christ's one act of righteousness that leads to grace for all.

An Augustinian reading of the text insists that we receive a "fallen nature" from Adam on account of the fall, which (we are told) is the reason why we are "sinners" even before we commit an act of sin. But Scripture nowhere teaches this idea; it is a complete interpolation into the story.

The idea is meant to explain, in Augustinian fashion, why in the human experience we find it impossible "not to sin" (non posse non peccare).  Yet even Augustine admitted that sin was possible prior to the fall, as something inherent to human nature as originally constituted (posse peccare). So why do we need to "up the ante"?  Employing Occam's famous razor, could we not simply say that as descendants of Adam (metaphorically speaking) we inherit his (pre-fall) ability to sin? As it turns out, the inheritance of a "fallen nature" subsequent to the fall is unnecessary as an explanation of why we sin. Indeed, experience tells us that the compulsion and propensity to sin is very much a part of human nature, and most certainly always has been, Adam not excepted. This is a profound mystery, which the Bible never really explains, Augustine notwithstanding. The old adage that "we are not sinners because we sin, but rather we sin because we are sinners" turns out at best to be a distinction without a difference.


In summary, the three premises above address three theological fallacies of the Augustinian system: (1) inherited guilt, (2) the origin of sin, and (3) the contraction of a fallen nature. Given these Augustinian assumptions it is easy to see why most Western Christians, even many who embrace some form of theistic evolution, are keen to retain some semblance of historicity in the Adam-story. Without a historical Adam, there is no historical fall; without a historical fall, there is no need for a Savior in history, or so the argument goes.

What I have presented above is a way to read the Adam-story apart from Augustinian assumptions, something that Eastern Orthodox Christians have been doing for quite some time. It is the most natural reading of the story, free of theological interpolation. Moreover, it has a distinct advantage over the Augustinian reading in that it roots the human condition in something more constitutional and "original" than the legal fiction of an inherited guilt from a primordial act of transgression. It roots the human condition in the "Adamic nature" itself.  As such, it is a reading that is less dependent on the question of whether the story should be taken as "event" or as "metaphor."

END NOTE: The title of this post is a play on the words of a title and theme that C. Baxter Kruger has used for a number of articles, lectures, and at least one book, Jesus and the Undoing of Adam.