Paradise Imagined (Part One): Toward an evolutionary account of Original Sin 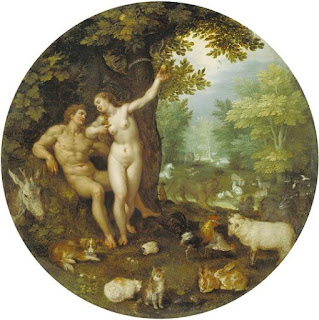 Though a theistic-evolutionist might at first be tempted to set aside the doctrine of Original Sin as the product of a "pre-scientific" age, our previous examination of the "Two Minds" of Augustine revealed a rich theological tradition behind the Augustinian meta-narrative that could rightly be employed in the service of an informed contemporary accounting of the nature of humanity and of sin. Yet even after conceding as much, the theistic-evolutionist should still proceed with caution lest the temptation should arise again to cast the doctrine aside after plundering its riches.

Truth be told, a theistic-evolutionary account cannot avoid its obligation to attempt a recasting of Original Sin in light of its own insights if those same insights should ever stand a chance of being recognized as Christian. This is not merely because Original Sin has been such a dominant theme in Christian theological discourse over the last two millennia. Rather, the Christian Gospel requires an etiology for sin in order for there to be any gospel at all. Simply put, there can be no remedy, no cure, no medicine, unless the sickness and its cause are identified for what they are.

Before moving forward from this point, it may be helpful to consider other insights that might be gleaned from the history of this doctrine, particularly the insights of a perspective we have only briefly considered in other articles: the perspective of Eastern Orthodoxy (e.g. Adam and the Undoing of Augustine). Generally speaking, Eastern views of Original Sin (more accurately "Ancestral Sin") have not been encumbered by the metaphysical speculations that have weighed down the Western discussion (e.g. original righteousness, transference of guilt, etc.). In contrast, Eastern views are refreshingly straightforward commentaries on the Genesis account of the Fall and of Paul's understanding of it in Romans 5: the story of "Paradise Lost."

To the Eastern mind, what Adam "lost" in the Fall for himself and his progeny had nothing to do with natural or supernatural attributes, either originally instilled or endowed in human nature -- issues we noted that so preoccupied Western discussions of Original Sin. Rather what Adam "lost" or, more accurately, what he "forfeited," was twofold: (1) communion and fellowship with God in the Garden; and (2) the gift of life (immortality) made possible by Adam's access to the Tree of Life. In fact, it would be accurate to suggest that not only had nothing been "lost" in the Fall with respect to human nature, but something had actually been "gained" in the Fall, namely the experiential knowledge of good and evil.

Two trees stood in the midst of the Garden: one conferring life and one conferring the knowledge of good and evil. As long as Adam remained obedient to the command not to eat of the fruit of the latter, he continued to have access to the fruit of the former. He would also remain in communion with God within the safe environment of the Garden. Beyond Eden lied the realm of death and dis-fellowship; expulsion from the Garden meant the same. This is precisely why the traditional Eastern Orthodox reading of Romans 5 sees the entrance of "death" into the world as its primary focus rather than that of "sin."

This is not to say that the Eastern Orthodox understanding of Ancestral Sin denies that, in some sense, human nature was affected by the Fall. Indeed, Paul's entire argument rests on the premise that "one man's trespass" effected death for all people. In other words, sin is never an isolated affair. The "knowledge of good and evil," once actualized, increases exponentially in the human condition -- "Through the disobedience of one man the many were made sinners" (Romans 5:19).

Finally, there is also a cosmic dimension to some Eastern explications. In some sense, Adam's death meant the condemnation of all creation -- "For we know that the whole creation has been groaning together in childbirth until now" (Romans 8:22). The Garden of Eden was but a foretaste, the mere beginnings, of a theosis that would encompass the entire cosmos; and Adam, the Creator's appointed caretaker of the Garden, would in time graduate to become caretaker of the entire cosmos. Adam's fall was creation's fall. When Adam fails to live up to his calling, no hope remains that the cosmos will realize its own.

However, a theistic-evolutionary perspective still demands its own account, and one in which the Genesis story of the Fall must still serve as an etiology, though not in terms of "Paradise Lost," but rather in terms of "Paradise Imagined." Yet, before we attempt such an account (which we shall endeavor to do in Part Two), it will do well for us to review the insights from the Eastern view that could prove useful to it:

1. The Eastern understanding of the Fall as "forfeiture" of the paradisiacal conditions of Eden over against the Western understanding of the Fall as the "loss of original righteousness." In either case, the theistic-evolutionist is not looking to identify or locate a "primordial Eden" in the natural history of the universe. Yet the mythological account of "Paradise Imagined" -- lost to humanity through willful disobedience -- is illustrative of the nagging realization that something has gone terribly awry in the cosmos, that humanity has not lived up to its calling, and that the failure to do so has meant the forfeiture of the ultimate purpose for humanity's existence -- i.e., communion in the divine life ("Paradise Realized").

2. The Eastern understanding that sin is never an isolated affair. As one man's trespass effected death for all humanity, so each subsequent act of willful disobedience compounds the problem of humanity's exclusion from Eden and estrangement from God. Again, the theistic-evolutionist is not interested in finding sin's origin in one primordial act of transgression. Yet "Paradise Imagined" is illustrative of sin's compound deleterious effects on the human race and compels the theistic-evolutionist somehow to account for sin's origination within the conditions of cosmic history.

3. The Eastern understanding of the cosmic dimension of the Fall. The entire cosmos is invested in Adam's destiny, so when Adam falls, all creation falls with him. Death becomes condemnation. Again, the theistic-evolutionist is not interested in blaming one common ancestor for the condemnation of all of creation. Yet "Paradise Imagined" is illustrative of the solidarity and theotic destiny of the entire cosmos as Imago Dei; a destiny only just recently actualized for the whole universe in the emergent consciousness and moral awakening of a tiny population of terrestrially-bound hominids ... as comical as that may appear to be.