Theosis Interrupted: An evolutionary look at the creation of the cosmos and the fall of Adam (Part One) 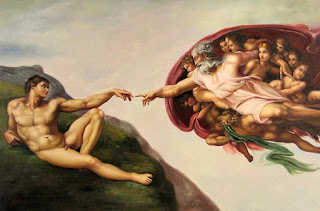 Creation is an act of kenosis, i.e. a “self-emptying,” whereby the Creator pours out the divine-self to “make room” for something other than the divine-self.  Yet creation is not so much “event” as it is a series of dynamic, ongoing, purposeful and transformative processes. In the initial act of creation, God calls the cosmos into being from non-being (creatio ex nihilo). But God also continues to call and draw the cosmos towards the gradual attainment of greater and greater complexity (creatio continua), eventually manifesting itself in the emergence of life, sentience, consciousness, rationality, moral awareness, spiritually, love, beauty, joy, and, ultimately, the beatific vision. Considered in terms of mere physicalism, these processes may be rightly subsumed under the scientific term “evolution.”

If the initial act of creation is the gift of “being,” then kenosis – the divine “making room” – must also include the gift and dynamic of “becoming.” Hence, in principle, the transformative processes of creatio continua are contingent and “free” rather than determined and pre-ordained. It also stands to reason that death, considered from a pre-lapsarian point of view, plays an important role in this. From the extinction of stars to the exterminations that result from the energy demands of biological life forms, each instance of death constitutes the sacrificial act of a self-recapitulating universe responding to the call of its Creator towards greater and greater complexity.

However, considered only in terms of physicalism, this description is inadequate. Hence, theologically, we may call this transformation theosis – the deification of the cosmos as God draws it into communion with his own inner life. Seen from this perspective, the image of God is instilled in the cosmos at initial creation as imago Dei in potentia. Consequently, the emergence not only of consciousness but also of the moral awareness of the imago Dei is inevitable, even if the precise conditions and occasions for such emergence are contingent and undetermined.

Yet once the divine image is actualized (imago Dei in actu), indeterminacy and freedom take on new significance in a newly actualized moral realm – namely in the efficacy of volition and the possibility of willful disobedience. In the moral realm, death takes on new significance as well – as judgment and condemnation in view of disobedience. Death becomes a malignancy in the cosmos when Adam (i.e. humanity) awakens to his moral calling before God, and falls short of it through the misuse of the gift of freedom. Self-recapitulation becomes self-condemnation – the Fall.