Note: The "s" is intended to be silent. 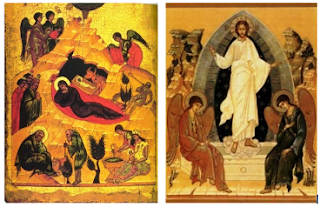 Anthropocentrism can be defined as the assessment of reality through an exclusively human perspective. At best it appears to be an illusory assessment, relativized as it is in the age of science by what we now know of the vastness of the universe, the diversity of life, and the indeterminacy of natural processes. Yet it is not what we actually know about the cosmos that so relativizes our anthropocentric impulses as much as it is the profound sense of what we do not know.

In theology, however, anthropocentrism is a necessary presupposition. Any coherent account of divine disclosure to human experience within human experience must be interpreted from human experience. While some may balk at this assertion on the grounds that the Christian assessment of reality is grounded in Christ (thus, "Christocentrism") the fact remains that the significance of the Christ-event lies in the incarnation. So the fourth gospel says, "The Logos became flesh and dwelt among us." Hence, theological anthropocentrism is Christocentrism, and vice versa.

Yet, in view of science, the theological task must take great care lest its presupposition of theological anthropocentrism degrades into crass "anthropological exceptionalism," wherein lies the failure of much of what passes for religious discourse to speak meaningfully to a scientific age. For the purposes of this essay (and the one that follows), anthropological exceptionalism can be defined as the belief that humanity has a unique call, a unique place, a unique destiny which the rest of the cosmos either has no share in or has a share in only in respect of human mediation or administration.

As argued in "Imago Dei, Divine Risk & the Freedom to Become," nothing precludes the emergence of life elsewhere in the universe, even sentient, conscious and intelligent life. From a theistic-evolutionary perspective, not only can we "hardly afford to reify the Edenic myth of the earth as a place in the universe specially prepared to await the arrival of our species," but we can hardly claim, as a theological necessity, that there is anything exceptional about our peculiar species of terrestrially-bound hominid that would preclude the possibility of multiple instances of divine incarnation elsewhere in the "world of the universe that is."

While the human species may indeed be considered unique among all known living things, and thus extraordinary in that regard, the theistic-evolutionist must regard, in principle, the potential to be "self-aware" -- conscious, intelligent, and even moral -- as instilled in the created order itself, endowed by its Creator who draws all of creation into the divine life (defined in another essay in terms of imago Dei in potentia). Indeed, nothing precludes the possibility of self-awareness emerging elsewhere in the universe, perhaps many times over. It just so happens to have happened here on planet earth, through the evolutionary, adaptive process known as "natural selection"; and it just so happens to have been actualized in anthropos -- the universe become both "self-aware" and aware of its Creator, and, as a consequence, aware (at least partially) of the purpose for its creation: theosis.

It would not, therefore, be unreasonable (from a theistic-evolutionary perspective) to consider natural selection as the process that brings about the necessary conditions of and context for incarnation. This would mean then that incarnation should not be regarded as a divine afterthought or contingency plan in view of the Fall, but rather as the divinely-purposed natural outcome of creation, its pinnacle, its final end, its telos.