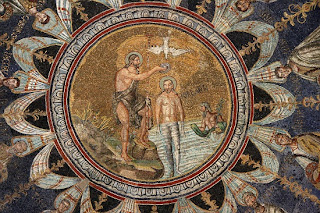 From the one unoriginate Father the Logos (Son) is begotten and the Spirit proceeds eternally, or so goes the orthodox understanding of the immanent Trinity (i.e. the interior life of the Godhead). Yet both "begetting" and "proceeding" imply time and motion, meaningless concepts from an eternal frame of reference. Hence, linguistically speaking, Arius was correct: sons are begotten of fathers in time, necessitating a distinct terminus a quo -- a beginning. Similarly, to "proceed from" or to be "sent forth from" implies movement and progression from a distinct point of origin.

The problem of finding a coherent language to describe the immanent Trinity was apparent from the first controversies of the church. The Arians, in attempting to prove the creaturely nature of the Son, posed the question of whether God begat the Logos out of necessity (i.e. by nature) or out of volition (i.e. by will). If by nature then, they reasoned, the Father could not be said to have begotten the Son willingly, but rather out of necessity (out of compulsion of nature), which mitigated the freedom of God and compromised the simplicity of God -- in other words, making God less than God. If, however, God willed the existence (the begetting) of the Logos then the Arian aphorism was correct: "There was a time when he was not," ergo the Logos was a creature.

The orthodox response was twofold; firstly, they countered that what pertains to the necessity of nature in the creaturely realm does not apply to the Eternal. On this point, the orthodox would have done well simply to rest their case. But they went further to contend that indeed God does beget by nature -- hence, eternally -- but not in any way that would conflict with or contradict his willingness to beget. In other words it is of God's nature to beget and he does so willingly; and since nature is a prior consideration to volition the principle of the causation of the Son was upheld to be the divine nature not the divine will.

The foregoing brief summary hardly does justice to the tediousness of the arguments involved, though it is enough to show how superfluous it is to attempt saying anything about the mystery of the interior life of the God; that is, apart from the self-communication of God in history! Indeed, Karl Rahner's Grundaxiom rings true: "The economic Trinity is the immanent Trinity, and the immanent Trinity is the economic Trinity." In other words, there is no Trinity, at least not one about which we can speak coherently, apart from the oikomenos (the economy) wherein God communicates God-self to human experience within human experience.

"The economic Trinity is the immanent Trinity, and vice versa." In other words, we must be content in our language about God to settle for a grammatical truth (to borrow a concept from Nicholas Lash), that is to say, a referential truth about God in history, rather than a descriptive truth about God as God. For instance, to speak of the Son as homoousios with the Father is not to say anything more than that which pertains to the Father pertains to the Son, except that the Father is not the Son and the Son is not the Father. Homoousios cannot otherwise speak about the divine essence or define what it means to say that the Father, Son and Holy Spirit are three hypostases of that one divine essence. Similarly, to say that the Son is eternally begotten of the Father is merely to refer to the One who was really begotten in history as the revealed Son of the self-revealing God. It is this Trinity, not some immanent Trinity beyond our ken, that is revealed to us and thus becomes the object of our worship.

Theological language serves as boundary and parameter, as pedagogue and teacher; but preeminently it serves as witness. In this sense, it speaks forth referential truth rather than descriptive truth about God, pointing us truly to the God who is worthy of our adoration rather than to a divine specimen subject to our taxonomic investigation. From the standpoint of eternity, nothing descriptive can be said of God that is not, and does not remain, mystery. This does not mean that our language about God is untrue. Rather, it is "true enough," in that it is grounded in divine encounter, and thus constitutes true revelation to human experience within human experience -- that is to say, IN TIME.

Indeed, time is the only realm in which both divine encounter with, and thus true language about, God are possible: "The economic Trinity is the immanent Trinity, and vice versa." This makes it all the more imperative that what we say about God is true, that is, a true witness pointing to (i.e. referring to) the Eternal One who breaks into history and human experience, thus ensuring that our worship and adoration are directed to none other.

Part One
Posted by Dan Dunlap at 4:29 PM