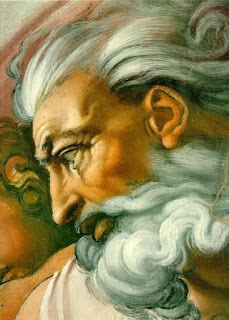 Marcion's Dilemma strikes at the very heart of what Christians believe about their sacred scriptures, not only because it compelled the early church to define its canon and embrace the old-new dichotomy of the testaments, but also because it imposed upon theologians the persistent task of having to reconcile the picture of the capricious God of the Hebrews with the picture of the all-loving God and Father of Jesus Christ. In Part Three, we briefly considered two approaches to this dilemma, namely the theologies of discontinuity and continuity.

Given these options, we were left with a god who either suffers from multiple personality disorder (discontinuity) or bipolar disorder (continuity). In either case, the Cross is viewed as the "means of satisfaction," the purpose of which is to appease the part of the divine personality that we would rather not face, indeed, that we "could not see and live." Perfect justice, we are told, demands divine retribution, whereas divine love seeks to forgive. What to do? The proffered solution sees God the Father as unleashing punitive justice upon the Son, thereby satiating divine wrath and opening up the way of forgiveness for those who believe. It's a tidy system; the problem is, it is not a just system. There is simply no way to uphold the righteousness of a God who would allow -- nay, demand -- the substitution of an innocent party for a guilty one, even if such a substitution were done voluntarily.

Indeed, such an examination compels us to go further than Marcion's original observation to admit that Scripture simply does not present us with a coherent picture of God at all. Rather the scriptural testimony of God is equivocal, and, if equivocal, then eminently human. The implications of this admission are startling at first, at least to the traditional-minded, for what this means is that we can no longer consider the Bible in terms of direct divine disclosure to humankind. Rather Scripture constitutes a multifaceted witness of distinctly human experiences of, and encounters with, the divine. Such descriptions of God are inextricably woven into the fabric of the human condition, and thus are anthropomorphic rather than theophanic, analogical rather that literal, poetic rather than propositional, dynamic rather than static, progressive rather than fixed, rudimentary rather than complete.

In this sense the biblical portraits of God tell us more about the human condition than they do about divine nature qua nature. They are not pictures of the way God actually is, but rather are projections of how human beings have encountered the divine in history. These are very human portraits, and yet sacred: human, because they ascribe to God human motives and emotions, even reflecting at times the pettiness and darkness of the human heart; sacred, because they are encounters with the divine, and thus "word of God" enfleshed in human condition, wholly and without qualification.

Often glorious, sometimes crude, but always meaningful, these portraits express and "divinize" our deepest sense of estrangement from what Tillich terms the "Ground of our Being."