Babel-Fish & ID: My conversation with a proponent of Intelligent Design 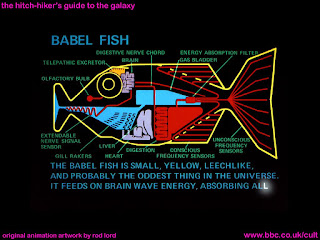 (Note: Attempts to prove the existence of God empirically, like the arguments proposed by the Intelligent Design movement, I like to refer to as "Babel-fish" proofs, from Douglas Adams' The Hitchhiker's Guide to the Galaxy.)

Here's my position in a nutshell, using the seasonally appropriate illustration of the empty tomb. The empty tomb is no more proof that Jesus rose from the dead on the first Easter morning than is the existence of an empty coffee cup in my sink proof that I had coffee this morning. (I actually had tea, it was yesterday afternoon, and I just hadn't gotten around to doing the dishes.) There are many reasons why the tomb of Jesus might have been empty on the first Easter morning. His resurrection is simply one of the them. But it just so happens to be the explanation that Christians believe. It is also, in my opinion, the best explanation given all factors (including the empirical testimony of an empty tomb). But I cannot prove the resurrection ever happened. The empty tomb stands as a witness to the faith of the Church in the resurrection of her Lord, and thus as a sign and a testimony to all who will hear the good news.

Similarly, the intelligibility of the created order calls out for an explanation. I believe, after all factors are taken into consideration, that an "Intelligent Designer" (better yet -- a "Creator God"!) is the best explanation. I believe this. But I cannot hope to "prove" it, empirically speaking.