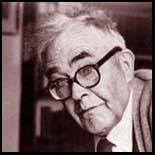 
I was mesmerized for one semester by the boldness of Van Til’s thinking, but by the second semester I began to suspect that he was stretching a defensible theory of knowledge to the borders of absurdity. If true, it would mean that unless any two people had correct beliefs about God and about the world they could not have a genuine conversation about anything. How can two people talk respectfully together about interesting parts of reality — the economy, for instance, or the possibility of life on Mars — if one of them assumes that everything the other person says about anything is doomed to be dead wrong?

Van Til was convinced that if anyone’s assumptions about God are wrong, she cannot be trusted even when she says that she believes the gospel truth about Jesus. He wrote a book called The New Modernism in which he contended that the star theologian of the century, Karl Barth, was a modernist because, in Van Til’s view, he denied that Jesus was God in human form and denied as well that he had risen from the dead. The hitch was that Barth had affirmed these things over and over and, in fact, was largely to be credited with bringing the gospel back into the churches of Europe. But Van Til said that even if Barth shouted from the tower of St. Peter’s that Jesus was the Son of God, he could not believe what he was saying. His philosophical presuppositions would not let him.

Several years later, after I had finished my graduate studies in Amsterdam, I had occasion to put the question to Barth himself: “Sir, if you will permit me an absurd anachronism, let us suppose that a journalist carried a camera into Jesus’ tomb about eight o’clock on Easter Sunday morning and took pictures of every inch of the tomb, what would have showed up on his film?” Barth sighed. This again? He had been asked questions like this by every skeptical evangelical who got within shouting distance of him. But he was patient: “He would have gotten nothing but pictures of an empty tomb. Jesus was not there. He had walked out of the tomb early that morning.”

I told Van Til about this conversation. His answer was, for me, a final exhibition of intellectual futility. “Smedes,” he said, “you have studied philosophy, you should know that Barth cannot believe that Jesus rose from the dead.” Cannot! Not merely does not, but cannot believe what he said he believed. Conversation finished.

For more on Karl Barth's understanding of the Resurrection and the Empty Tomb read "The Quest for the Mythhistorical Jesus: The Witness of the Empty Tomb".