Weighing in on the "Adam Debate" 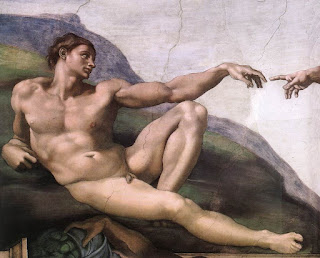 Peter Enns' latest book, The Evolution of Adam, seems to be generating a lot of buzz on the internet of late.  Currently it is ranked #1 on Amazon for new books on Science and Religion -- quite an accomplishment for a book that (to date) has yet to be released.  I have always enjoyed Enns' contribution to the science and religion dialogue, particularly his work with the Biologos Forum, so I'm looking forward to reading this book.  (Incidentally, Enns is no longer employed by Biologos.)

Meanwhile, I was thinking that the "historicity of Adam" debate might be just the thing to kick-off the Post-Catholic Project.  So, as an inaugural post, I will weigh in on a rather heated charge made by SBTS president, Al Mohler, in his recent article, Adam and Eve: Clarifying Again What is at Stake, namely that a denial of a historical Adam and Eve is detrimental to the "Apostle Paul's telling of the story of the Bible and the meaning of the Gospel."  Mohler's concern is to demonstrate that the historicity of Genesis 2-3 is an essential proposition in Paul's "telling of the story of the Bible" (e.g. Romans 5 and 1 Corinthians 15).  Simply put, according to Dr. Mohler, without a historical Adam and Eve there is no Gospel. To quote Mohler more fully:


If Adam was not a historical figure, and thus if there was no Fall into sin and all humanity did not thus sin in Adam, then Paul’s telling of the Gospel is wrong. Furthermore, Paul was simply mistaken to believe that Adam had been a real human being.

My first inclination as a self-confessed "post-catholic thinker" is to ask: Why would it be such a big deal if Paul were "simply mistaken"?  But then I realize that in asking this question I would be jumping way ahead of where many Christians are, particularly those who identify with evangelicalism (the very camp that Dr. Enns is keen to persuade).  So I'll ask my question in a different way:

Why should we assume that the Apostle Paul would have understood the Adam-story differently than any other traditional Jewish thinker of his day?

The answer is self-evident.  He wouldn't have.  Mohler would not deny this; in fact, Mohler might probably say a hearty "Amen!" at this point.  But once we take as axiomatic the premise that Paul shared an understanding of the Adam-story that was considered "a given" within his own religious context we are halfway there.  As a follow-up question we might then ask (within the context of this present debate) whether it would have been possible or likely that a traditional Jewish thinker, like Paul, could have held any other position?  Here again I would answer in the negative.  Why?  Simply because it would be a gross anachronism to suggest that the question of whether the Adam-story may or may not have happened in the manner portrayed in Genesis, or have happened at all for that matter, would ever have occurred to Paul or to anyone else in his religious context.  So should it really surprise us that Paul assumed that Adam had been a real human being? Does it really matter that he did? (More on this question later.)

Granted, one might well counter this line of thinking by asserting that a proper understanding of divine inspiration would require the intervention of the Holy Spirit at this point to correct Paul's understanding of the Adam-story (perhaps by whispering in his ear as he wrote Romans 5), or otherwise to preserve the text of scripture from any erroneous, albeit pious, assumptions that Paul or any other writer of scripture might otherwise be inclined to make.  But is it really necessary to go through such hermeneutical gymnastics to prop up our theological assumptions, especially when additional information and evidence fly in the face of those assumptions?  (E.g. one could cite the overwhelming genetic evidence for the polygenic origin of the human species, thus calling into question the status of Adam and Eve as the "first humans"...but I digress.)

For Paul, there would have been no way of going back to witness these events himself, nor could he have appealed to any contemporaneous witnesses or records of these events either to confirm or deny them.  The historiographical or literary methods available to us today did not yet exist.  There was no way to examine the stories of Genesis in light of a plethora of other ancient origin stories, nor (as yet) any scientific considerations that might well have called their historicity into question.  Paul possessed neither the tools of inquiry, nor the methodologies of research, nor even the categories of thought, that we take for granted today.  Simply put, it would never have occurred to Paul to ask the questions of the texts that we ask of them today.  The biblical accounts of Genesis were simply stories; sacred stories, to be sure, but stories nonetheless.

It is time now to return to our earlier question: Does it really matter that Paul assumed Adam's historicity?  More precisely, if Adam had not existed, then was Paul's "telling of the Gospel" false?  It is here that C.S. Lewis' concept of "true myth" can be instructive. Both Lewis and Tolkien understood Christ's saving work (i.e. atonement, resurrection) as God's "true myth," acted out in space and time.  In their view God was at work even in the minds of pagan storytellers, whose myths of dying and resurrected gods and/or godlike heroes were likened to "divinely-inspired glimpses" and precursors to God's "true myth" -- the drama of the Christ-story. In Lewis' words:


The story of Christ is simply a true myth; a myth working on us in the same way as the others, but with this tremendous difference, that it really happened, and one must be content to accept it in the same way, remembering that it is God's Myth where the others are men's myths.

If the man-made myths of pagan poets and storytellers can serve as precursors to God's "true myth" in history, how much more natural and appropriate the sacred, divinely-inspired myths of Hebrew poets and storytellers?  When seen from this perspective then the correspondence between the work of Christ and the primordial story of the human condition and solidarity in sin and death as personified in Adam is something that would obviously have resonated deeply with Paul, the faithful Jewish exegete that he was.  Far from being detrimental to the Gospel, such a correspondence confirms both the sacred stories of the Hebrew people as the divine backdrop and stage of the drama of the Christ-story, and the Gospel as God's remedy and cure for the ravages of sin and death as portrayed in the drama of the Adam-story.

The Adam-story was Paul's heritage as a descendant of Abraham, the heritage of his immediate faith-community, as well as the heritage of the faith-community that lives on today.  It is a sacred story which continues to be part of the faith-community's sacred text; a story not subject to negotiation as an integral part of how the People of God understand themselves in relation to their God and to the world.  For the ancient Israelites the story served to reify the human condition as they understood it, providing an etiology (i.e. origin story) for the entrance of sin and death into the world.  As such, it is reasonable to conclude that the ancients would have found theological meaning in the telling of the Adam-story as "event."  Yet people of faith today continue to tell the story, and continue to be instructed by it as a metaphor of the human condition (e.g. the universality of sin, as well as its nature/consequences, and "death" as our cosmic enemy, etc.).  It has just as much theological meaning when understood as "parable," perhaps even more.  We can say this because the Adam-story's rightful inclusion in the "Torah" is no more contingent on ancient assumptions than its canonical status as the "Word of God" is jeopardized by our modern ones.
Posted by Dan Dunlap at 10:02 PM