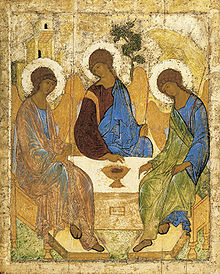 Eternity: we cannot hope to understand this concept. All of our explanations are at best provisional. Specifically we cannot hope to understand God's eternity -- God as "ever-present." We exist, that is, we derive from a causation outside of ourselves. This means that we are of necessity bound to temporality -- progression, development, adaptation, change on a continuum. For us eternity can be known only via intuition, as the ground of what it means to be created ex nihilo.

Thus in talking about eternity we are trapped in a paradox of conscripting temporal metaphors into service as witnesses to that which is beyond their power to describe: timelessness. The use of theological terms such as "eternity past," or even the credal "before all worlds (aeons)," unwittingly introduces duration and change to our conceptions of the divine. Yet we are compelled either to describe the eternal in such manner or fastidiously to avoid temporal metaphors altogether and consequently fail to appreciate the dynamism of the Eternal-Present One who never ceases to convict, to call, and to draw all things to himself.

In any case, the former approach has antiquity to commend it, particularly in biblical metaphor: "The same yesterday, today, and forever..." "The Alpha and the Omega..." "The Beginning and the End..." -- time language where no time applies. The vicissitudes of Israel's God who "changes his mind" often may tell us little about God as God, but such stories do serve to reveal something about ourselves.

It is in the limitation of language that Arius fell into error. Arius inferred from the begottenness of the Son a temporal beginning, hence, "There was a time when he was not." This is precisely where language -- "begotten" -- failed Arius (and fails us) in its insufficiency to communicate ontological eternity, while at the same time eminently succeeding in expressing something of the dynamic ever-present filialism of God the Father, for truly, "in the beginning," the Logos was with God and was itself divine.

Yet, still, there is an element of truth in Arius' statement: "There was a time when he was not." To speak of a "pre-incarnate Christ," that is from a temporal point of reference, is nonsensical. Ironically, such language infuses a degree of Docetism into the Godhead, not in "seeming to be human" but rather in "seeming to be divine." A pre-incarnate Christ, which is to say a NON-incarnate Christ, is at best an abstraction and at worst a demigod waiting (a temporal verb) for a body. Yet, historically speaking, there was a "before the incarnation" when there was no Son for Israel to worship, no Trinity to adore -- not merely from the revelatory standpoint of a truth awaiting its full disclosure, but from the temporal standpoint of a people who were still waiting for the visitation of their God. This is precisely why the fourth evangelist, in describing both creation "in the beginning" and incarnation, sets forth the Divine Logos, not Jesus, as their historical referent.

Yet from the standpoint of eternity -- God's reality of "ever-presence" -- the Father does not exist apart the Son, nor the Son in abstraction from the Father. The Son knows no "time" (again the limits of language) when he was unbegotten. The "one Lord Jesus," the fully-incarnate Christ (not some divine shade awaiting a body), is "begotten of the Father before all worlds...begotten not made." Nor does the Father exist without humanity, because, in the words of Barth scholar George Hunsinger, "God has decided in Jesus Christ not to be God without us" (How to Read Karl Barth, p. 153).

This is indeed a great mystery, but one born of the limits of our temporality, within which we must somehow grasp, even for a moment, that what is and always has been true about God still lies in our future.