Anglicanism's First Archbishop: Why the Consecration of Matthew Parker Matters 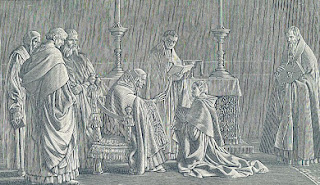 When Elizabeth I succeeded to the throne of England in 1558, she inherited ten vacant episcopal sees and a bench of fifteen sitting bishops who had only just recently sworn allegiance to Rome during the reign of Mary, her half-sister. Though a fair number of these had served her father, Henry VIII, only one, Anthony Kitchin of Llandaff, could ever bring himself to acknowledge a woman as “Supreme Governor…in all spiritual and ecclesiastical things or causes.” After a speedy dismissal of the Marian bench, the net result for Elizabeth was 24 open sees, with barely a handful of surviving Protestant bishops (those consecrated during the reign of her half-brother, Edward) to fill them.

Yet, the more pressing question for Elizabeth was whom she would nominate as her first Archbishop of Canterbury. Whether due to their suspect views or doubts as to their fortitude, Elizabeth passed over all of the Edwardian bishops, and instead tapped a favorite, Matthew Parker, a priest, and one-time chaplain to her mother, Anne Boleyn.

Like many of his generation, Parker had been ordained during Henry’s reign and held a number of posts and preferments. After Henry’s break with Rome, Parker had begun to align himself with the reforming party led by Archbishop Cranmer. Yet it was never his nature to bring attention to himself. Perhaps his boldest personal move happened early in Edward’s reign, when he took the opportunity afforded by the repeal of the Six Articles to marry, even though clerical marriage was still technically unlawful. Thereafter, due to his identification with the Protestant cause, Parker found steady promotion.

During Mary’s reign, he was hardly noticed by the government, partly because he had no desire for heroics, and partly because he was loyal to the English throne, no matter who happened to be on it at the time. Yet he never submitted to Rome. In Elizabeth’s eyes, Parker was a kindred spirit, for she too had found a way to survive Mary’s reign without courting martyrdom. Parker was seen as a conservative reformer of moderate temperament who could be trusted to uphold Elizabeth as Supreme Governor and implement her religious settlement. This was an important set of traits at a time when one’s perceived adversaries were found at both extremes of the scale of Protestant and Catholic sensibilities.

Contrary to the popular thinking, the title “Anglicanism’s First Archbishop” properly belongs to Matthew Parker, not to Thomas Cranmer, as the latter had been made archbishop before King Henry’s famous break with Rome. Parker was consecrated at Lambeth Palace on 17 December 1559 according to the form prescribed in the 155o Edwardine Ordinal. Taking part in his consecration were two bishops from Edward’s reign, John Scory and Miles Coverdale, and two who had been ordained under Henry: William Barlow and John Hodgkin. So two lines of descent, Roman and Reformed, came together to produce the first Anglican successor to the see of St. Augustine.

Naturally, given the polemical climate of the times, doubts over the validity of Parker’s archiepiscopate surfaced almost immediately. These doubts would eventually give way to rumors of impropriety at his consecration. One such rumor claimed that one of his consecrators had never been consecrated himself! However, the most colorful rumor, originating about 30 years after Parker’s death, was the story of the Nag’s Head Tavern, where it was alleged that Parker, and up to four others, had been crudely made bishops in a Cheapside tavern “without sermon, without sacrament, without solemnity.” Many years later an American clergyman would tell the story this way:

The Contrivance was…the Bishops Elect being met in Cheapside at the Nag's-Head Tavern, Neale, that had watched them thither, peeped in through an Hole of the Door, and saw them in great Disorder…But (as the Tale goes on) Scory bids them all kneel, and he laid the Bible upon every one of their Heads or Shoulders, and said, “Take thou Authority to preach the Word of God sincerely,” and so they rose up all Bishops!
[Thomas Bradbury Chandler, D.D. The appeal defended: or, The proposed American episcopate vindicated, in answer to the objections and misrepresentations of Dr. Chauncy and others, 1769]

Obviously the story is a fable. Yet as fables go, it was a pernicious one, prompting King James I to call for a full investigation of Parker’s actual consecration some forty-five years after the fact! Said James, “If the story be true we are no church.” That the Rev. Dr. Chandler (quoted above) still felt compelled to refute it in the 18th century shows just how stubborn a vicious rumor can be. Nonetheless the fable did set forth, albeit in caricature, the official Roman Catholic position, expressed in Leo XIII’s 1896 Apostolicae Curae, that Anglican orders were “absolutely null and utterly void” due to a deficiency in both intention and form – a verdict that sadly remains to this day.

Such was the importance (depending on one’s position) of either defending or dismantling historic succession as a hallmark of the Elizabethan Settlement. In practical terms, Parker’s consecration represented a bulwark against both extremes. His Roman adversaries insisted that the validity of orders depended entirely on liturgical pro forma. The admirers of Calvin’s Geneva reduced the office of bishop to a mere ecclesiastical institution. Indeed, many of the returning exiles from Mary’s reign were beginning to question the need for bishops at all! (a position that would shortly give rise to the Puritan movement).

Even Elizabeth, frustrated early in her reign by the voting block of Marian bishops in the House of Lords, had briefly flirted with the idea of abolishing the order. But she was quick to realize that the exercise of her own royal supremacy depended on keeping the episcopal bench in the Lords filled with bishops she could trust – like Archbishop Matthew Parker. As her cousin and successor, James I, would one day famously quip, “No bishop, no king.”

But to Parker, bishops served more than just pragmatic ends. Elizabeth could claim that her royal supremacy served to secure the independence of the English church, but Parker’s own office of Archbishop of Canterbury was nothing less than the guarantor of the English church’s continuity not only with its pre-Reformation past, but with its pre-Tudor Dynasty and pre-Norman Conquest pasts as well. Indeed, the Church of England, begot from Augustine’s original mission in Kent, persisted throughout successive monarchies, the vacillation of multiple governments, and even, as of late, controversies over doctrinal matters.

This much is evident from just the title of the magnum opus of Parker’s archiepiscopal tenure: The Antiquity of the British Church and the Prerogatives of the Same Church along with the Archbishops of Canterbury (1572). Here Mattheus (as he calls himself in the third person), the seventieth in line from Augustine, is marked out as the first archbishop to have received his consecration without the addition of “that long and offensive business of Papal superstition,” and without needless ornaments “far beyond even Aaron wore.” Rather, “in accordance with the Gospel,” he had been “simply and solemnly dedicated” to his office “by prayer and the invocation of the Spirit, and by the imposition of hands.” As Bishop John Wordsworth further describes,

“…after holy promises uttered by himself, arrayed in vestments befitting the authority and gravity of an Archbishop, and by the preaching of an eloquent exhortation by way of sermon from the lips of a holy learned Divine on the duty, care, and fidelity that a Pastor should have to his flock, and the love, obedience, and respect that the flock should show their Pastor.

Appropriately, the proceedings concluded with the Eucharist, when

“…at the last was offered public and earnest prayer that the office now laid upon him may specially tend to the glory of God, to the salvation of the flock, and to the joyful witness of his own conscience, whenever he shall have to render account of the office he has borne before the Lord.” (A Letter on the Succession of Bishops in the Church of England, 1890)

These descriptions make clear that only those who would judge the service for its alleged lack of specificity in doctrinal themes, or for failing to use certain prescribed formulas or ornaments, could possibly conclude that Parker’s ordination to the episcopate was somehow deficient in intention and form. Such would be a classic case of missing the forest for the trees.

To those who were inclined to view bishops as mere churchly administrators, either at the behest of the Crown, or, as the Puritans saw things, dubious bureaucrats and unscrupulous enforcers of personal privilege, Parker’s self-identity as the seventieth in line from Augustine was a reminder of the unbroken pastoral mission of the Church of England to the People of England; a mission which began when a small gaggle of Benedictine missionaries washed up along the shores of Kent in 597.

Herein lies the true genius behind the Anglican understanding of historic or “apostolic” succession. Succession is conceived as rooted in mission rather than as some kind of “Midas-touch” conferral of sacramental grace. This is not to say that intention and form are unimportant. Indeed, Parker’s own record would indicate that great care and propriety were taken to ensure that all the traditional elements of an archiepiscopal consecration, along with the requisite civil and canonical legalities, were present. But any critique of intention and form stripped from the context of mission reduces the role of bishops (or the role of priests for that matter) to that of solitary purveyors of grace. In such a view, episcopal consecration as the establishment of a pastoral relationship between a shepherd and a flock, and a flock to its shepherd, becomes a secondary consideration, rather than the thing itself.

Matthew Parker may rightly be called “Anglicanism’s First Archbishop,” but that title merely points to his 16th century context: that by virtue of royal prerogative and parliamentary act, the Church of England, as by law established, was no longer beholden to the Papacy. Yet to conclude from this title that Parker’s office and the church that he was called to shepherd were both novelties of the 16th century would be to commit a grave injustice to both the intention and the form of his actual consecration as successor to St. Augustine of Canterbury.

The Rev. Daniel K. Dunlap, Ph.D. is rector of Old Trinity Church – Dorchester Parish in Church Creek, MD, and serves on the Search & Nominating Committee for the Eleventh Bishop of the Episcopal Diocese of Easton.
Posted by Dan Dunlap at 10:22 AM