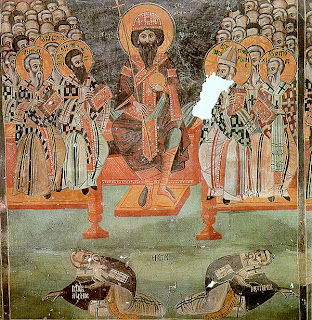 The philosophical issues surrounding the Christological controversies of the 5th century may seem tedious, but they have been the stuff of lasting division in Christianity. The Chalcedonian definition of 451, often seen as a triumph for orthodoxy in bringing together disparate approaches to the question of how the divine and human natures are united in Christ (indeed settling that question for the greater portion of Christianity) also produced a number of non-Chalcedonian churches. Separating not so much over substantive differences of faith, but rather over semantics, these unfortunate divisions persist to this day.

This sorry episode of Christian history begins with the controversy that set the stage for a contentious council held in Ephesus in 431, twenty years before the Council of Chalcedon. The warring sides in this debate were two competing schools based out of two cities: Antioch and Alexandria. The Antiochenes contended for a dyophysite or "two-nature" Christology (from the Greek duo physeis), positing not only the reality of two natures in Christ, but insisting that the full integrity of both natures remained intact after the union. The Alexandrians contended for a miaphysite or "one-nature" Christology (from the Greek mia physis), summarized in the dictums: "one nature out of the two" and "the one nature (physis) of the incarnate Logos." This latter approach was not intended to diminish the integrity of the two natures after the union, but rather to emphasize the completeness of their union in the one hypostasis (subsistence) and prosopon (person) of the Logos.

The champion of the Antiochene approach was Nestorius (386-450), who had been elevated to the all important see of Constantinople in 428. Shortly after his arrival in Constantinople, Nestorius instigated the controversy that would prove to be his undoing by teaching against the use of the title Theotokos ("God-bearer") for the Blessed Virgin Mary. Nestorius argued that the title was unfitting since Mary could only have given birth to the human nature of Christ; the eternal God could not be born. He suggested a compromise: Christotokos ("Christ-bearer"). But his objections to the traditional title were already perceived by the Alexandrians and their bishop Cyril (376-444) as a direct attack on their Christology.

Like his compatriots of the Antiochene school, Nestorius was a dyophysite, ironically, the position that would ultimately win the day at the Council of Chalcedon. Had it been as simple as the question of one or two natures, history might have been kinder to Nestorius, perhaps even vindicating him as the champion of orthodoxy rather than Cyril. But Nestorius's misstep was in the way he went about articulating the dyophysite position. For Nestorius, the two-natures Christology necessitated the reality of two corresponding hypostases or subsistences, each the proper and unique subject of its own nature. But if this were the case then how could a true union of the divine and human in Christ be posited?

Nestorius's solution was to propose a prosopic union (from the Greek prosopon). Most often translated "person," a more accurate rendering would be "manifestation of self." Nestorius had argued that even though each nature or hypostasis could be said to possess its own prosopon, yet in Christ the union meant that the two natures were united together in one "public face" or prosopon. However, this seemed to imply a conjoining of natures/hypostases in Christ rather than their true union. For that reason Nestorius's articulation fell short of both Antiochene and Alexandrian expectations.

On account of that misstep, Nestorius would find himself condemned by the Council of Ephesus in 431 (a council chaired by Cyril!). He fared even worse during the follow-up negotiations with Cyrillian party, when his Antiochene compatriots finally agreed to his condemnation and signed onto the compromise Formula of Reunion (433). Though imperial politics played a large part in all of this, there can be no doubt that Nestorius's condemnation was due mainly to theological clumsiness on his part.

However, Cyril was not to be outdone in theological clumsiness, offering up a rationale for miaphysitism that amounted to the merging of two natures to make one. Yet how could one speak of one "incarnate divine nature" without confusing the attributes and properties of the two natures that made up that one nature? This would be the conundrum taken up by Chalcedon and settled, ironically, in favor of dyophysitism. Yet where Cyril succeeded in uncutting his adversary was in his insistence that there could be but one subject in Christ, both in terms of subsistence (hypostasis) and manifestation (prosopon).

While Cyril's argument would win the day at Ephesus, the difference between heretic and orthodox actually amounted to a question of whose clumsiness was deemed the more egregious. Nestorius position may have been the one condemned, but some way forward would have to be found to prevent Cyril's Christology from degrading into Eutychian admixture and confusion, or worse, Apollinarian compositeness. Indeed, the only way forward would be to admit the dyophysitism that Nestorius had championed, but in such a way as to maintain Cyril's insistence on unipersonality. The marriage of the two would be the triumph of Chalcedon, in its "each nature (physeos) concurring in one person (prosopon) and one subsistence (hypostasin)" formula -- phraseology directly dependent on, if not conscripted from, the Tome of Pope Leo I.