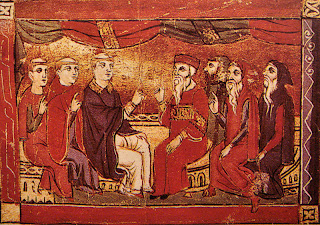 There is no way of knowing for certain when Nestorius died, but apparently he survived long enough to hear of the triumph of Flavian of Constantinople and Leo of Rome's orthodoxy at the Council of Chalcedon (451). Naturally, since they had both supported a dyophysite Christology over against Dioscorus (Cyril's successor in Alexandria), Nestorius took this news as vindication of his own orthodoxy. We know this from his last surviving work, written during his exile in Egypt, entitled The Bazaar of Heracleides. Interestingly, while this book shows that he was aware of Dioscorus's hasty flight from the council proceedings, it betrays no awareness on Nestorius's part of the council's actual formal rulings, including his own condemnation.

A casual observer of events might be excused for concluding that Chalcedon was a plethora of contradictions. For instance, while upholding Cyril's Twelve Chapters as the standard of orthodoxy for all other Christological statements (including Leo's Tome!), the council nonetheless deposed Cyril's successor and main advocate, Dioscorus. (Admittedly, this was done by an underwhelming number of bishops on the final day.) Meanwhile, much to the Cyrillian party's chagrine, the council conscripted into service Leo's Tome and its explicit dyophysite language for its own definition. To make matters worse (for the Cyrillian party anyway), the council failed to anathematize the revered Antiochene teacher, Theodore of Mopsuestia, along with two other prominent bishops, Theodoret of Cyrrhus and Ibas of Edessa, both of whom had written scathing refutations of Cyril's Twelve Chapters. Nonetheless, Chalcedon also saw fit to uphold the condemnation of Nestorius, the most notorious dyophysite of all.

It should come as no surprise then that the near-immediate result of Chalcedon was major schism, on both sides of the divide: Those who could not assent to the condemnation of Nestorius as well as those who judged that Dioscorus of Alexandria had been unfairly deposed. In the latter case, nearly the entire ancient Church of Alexandria, Cyril's former see, would break away from the rest of the Orthodox world. (The Coptic Orthodox Church descends from this break.)

Yet a closer look at the council's rationale reveals Chalcedon not so much as a cacophony of conflicting agendas and compromised solutions as it was a reconciliation of the legitimate insights of both sides of the miaphysite/dyophysite divide. Dioscorus had given every assurance that his understanding of the "one incarnate nature" formula of Cyril involved "no confusion, neither division nor change." Indeed, it was admitted at the time that Cyril's formula could be read in an orthodox way. Hence, though he fell short of Chalcedon's "in two natures" language, Dioscorus could at least affirm that Christ was from two natures. However, his misstep was that he defended Eutyches, the infamous archimandrite of Constantinople, whose position had been the presenting cause of Chalcedon in its assertion that Christ's humanity had been completely absorbed into his divinity.

In a similar vein, it was not Nestorius's insistence that Christ was "in two natures" after the union that caused the council to uphold his condemnation. Rather it was the fear that his "prosopic union" had compromised Cyril's insistence on a hypostatic union of the two natures (i.e. the unipersonality of Christ). Leo's Tome had affirmed both dyophysitism and unipersonality, and so won the day not as a compromise, but as masterful reconciliation.

One could be forgiven for thinking that these ancient debates are tediously irrelevant to the challenges facing Christians today. Yet even though the language may seem alien, these ontological categories are the foundation for how Christians have understood and taught their faith up to our very day; and they appear to be resilient enough to continue in that capacity for those who aspire to chart out a course for the articulation of the Christian faith in light of modern scientific inquiry and discovery, something that will be explored in a later post in this series.