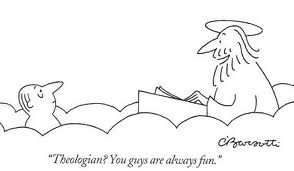 There are inquirers after truth, and there are defenders of truth conceived. In Christianity (or in any religion), the former are the theologians the latter are the apologists. The greatest mistake that either could make is to see their tasks as mutually exclusive.

Both serve a useful purpose. The apologist seeks to preserve and conserve the warranted conclusions of past inquiries after truth. The theologian seeks further truth, or to articulate deeper truth, in light of new discoveries and new insights within new contexts, specifically in areas where earlier articulations of truth may be found insufficient or shortsighted.

The wise theologian knows that while all inquiry is provisional, the most fruitful inquiry happens along the well-trodden paths of earlier inquiry, heeding the sign-posts of past travelers. The wise apologist knows that while the resilience of truth renders it impervious to spurious inquiry, the failure to acknowledge new discovery essentially amounts to a denial of the very truth that the apologist is duty-bound to defend.

The apologist should never mistake apologia for theologia. Neither should the theologian trivialize the hesitations of the apologist.
Posted by Dan Dunlap at 12:33 PM