Rehabilitating Pelagius: The Making of the West's Most Notorious "Heretic" 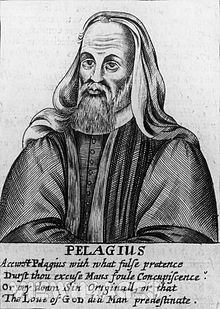 Perhaps no greater acrimony can be meted out in Christian debate than to accuse someone of "Pelagianism." Pelagius (354-418) was a popular ascetic whom most scholars accept was born somewhere in the British isles. Around 380 he moved to Rome where he took up writing and teaching about his ascetic practices. Around 405 he was exposed to some passages from Augustine's Confessions which provoked his first publicly-made objections to Augustine's views on predestination and grace, suggesting that such views were to blame for the moral laxity that he observed among Augustine's admirers in Rome. After the sack of Rome by Alaric in 410, Pelagius relocated for a short time to the city of Carthage where he had a brief, but memorable encounter with Augustine. Shortly thereafter the two adversaries began their famous literary debate.

Nowadays, it is generally conceded by scholars that Pelagius's notoriety in the Western Church owes at least as much to a misunderstanding and/or the misrepresentation of his views as it does to the ascendancy of Augustinianism in the West. The anti-Pelagian propositions of the Council Carthage (418) appear more to have been addressing Augustine's caricature of Pelagius's views and/or what the Council may have been led to believe were the logical implications of his views than they do an accurate account of what he actually taught. Among the propositions affirmed at Carthage (contra Pelagius) were:

1. That death came from sin and not from our physical nature;
2. That infants must be baptized to be cleansed from the guilt of Adam's original sin;
3. That justifying grace (infused not imputed) remits past sins and helps to avoid future ones;
4. That grace imparts both the strength and the will to act out God's commandments;
5. That no good works are possible without divine grace;
6. That saints confess to be sinners because they truly are;
7. That children dying without baptism are excluded from eternal life.

Amazingly, a contemporary assessment of at least some of these propositions is enough to make many Christians cringe with discomfort, even in contexts where the spirit of Augustinianism runs deep. Indeed, it is a testimony to Augustine's polemical skills and prolific output during this period that he is remembered as the premier patristic voice in the West, despite that fact that some of his views have either been largely qualified or quietly discarded, which makes it even more ironic that Pelagius is reckoned to be one of the church's most despicable heretics.

Naturally, Pelagius's literary output was suppressed after his condemnation and is thus no longer extant. Yet what does remain of his work demonstrates that many of the views attributed to him he in fact did not hold. For instance, it turns out that Pelagius actually did believe that baptism was necessary for the salvation of children, though he did not believe they were held accountable for Adam's sin; he did in fact believe that saints were sinners, though he also held that some saints had successfully stopped sinning (a common enough belief in his day, especially among ascetics); and he did hold that grace was necessary for good works and to please God, though he did not hold that such grace cancelled out the freedom of the will. Indeed, it appears that Pelagius even held to a form of prevenient grace that was necessary to draw a person to salvation, though obviously such grace was resistible.

Where Pelagius fell afoul of his great adversary Augustine was in his criticism of the latter's strict predestinarianism which, to Pelagius, seemed to suggest that human beings were mere automatons. Pelagius attributed this position to a residual "Manichaeism" in Augustine (recall that Augustine had been a Manichee), in which the flesh was considered utterly corrupt and evil and thus powerless to perform any works that could please God. In fact, all acts of the flesh were inherently sinful and worthy only of divine condemnation. Pelagius was appalled by what seemed to be the implication that human beings could be condemned for something they could not avoid (sin).

That Augustine did indeed retain something of his former Manichee views of human nature seems a fair assessment on Pelagius's part. But rather than base his pessimistic views of human nature in the Manichee mythos that the physical universe was not created by God at all, but rather by evil forces, Augustine found in his new Christian faith an explanation that seemed to uphold the doctrine of God as Creator of all things while at the same time exonerating God from being the author of sin. This was, of course, the story of the Fall of Adam in the Book of Genesis, especially as interpreted by Paul in his Letter to the Romans (chapter 5). Augustine reckoned that Adam's first sin was both the root of all evil and corruption in the world as well as the cause of mortality. As nothing remained of meritorious value in human nature after the Fall, salvation would necessarily be regarded as being of pure grace, in which the human will or volition could play only a passive role and only after it had first been regenerated by grace. Since it was obvious to Augustine that not all are redeemed, it must be the case that those who are redeemed are also predestined by God to salvation.

This would explain why Pelagius's positive views of the human will would be characterized by Augustine as amounting to the outright denial of such things as the necessity of grace in salvation, the universality of human sin, and even the need of baptism for the salvation of children. For Augustine, to deny the utter depravity of human beings (the foundation of his absolute view of predestination) was to deny the entirety of the catholic faith. Thus condemning Pelagius on these lesser matters (whether or not he had actually denied them) made him out to be the foe of long-cherished Christian doctrine and practice and thus someone who was eminently more condemnable by councils; whereas to challenge Pelagius's orthodoxy on the greater matter of the nature of predestination would have been to wage a war in an area that was not yet (nor ever would be) settled doctrine.

The background and issues raised in this ancient debate have never been more important than they are today, if only because of the near total monopoly that Augustinianism has had over western theology over the last sixteen centuries. This has not been without its consequences in the development of western theology, particularly in our own day when theologians are compelled to deal with the challenges presented by the discoveries of modern science, especially human origins. Indeed, rehabilitating Pelagius, at least in part, may go a long way to dismantle assumptions that have kept theologians from adequately facing these challenges.

For instance, given what we now know to be the origin of the human species through the process of evolution via natural selection, contemporary theologians can hardly take for granted the Augustinian notion that "death came from sin" and not from our physical nature; nor can it be seriously entertained that the "flesh," that is our "sin nature," derives from some supposed "first" or "original" sinful act that took place in an Edenic paradise. Simply put, the theological-narrative that Augustine had constructed from the Book of Genesis no longer suffices as an explanation for the origin of sin, the onset of mortality, or the need for grace, at least not in any reified or historical sense. Once this is admitted, even Augustine's doctrine of predestination loses much of its raison d'etre and begins to look suspiciously more and more like the fatalism that Pelagius contended that it was.

For further discussion see: Adam and the Undoing of Augustine.
See also: The "Two Minds" of Augustine: Original Sin Considered from an Evolutionary Perspective.
Posted by Dan Dunlap at 11:03 PM